How to Choose Between a Dome Camera and a Bullet Camera The question is, what are the differences between these two devices? And how do you go about choosing the right device for your needs? Let’s take an in-depth look at what makes dome cameras different from bullet cameras to help you make an informed decision.

The question is, what are the differences between these two devices? And how do you go about choosing the right device for your needs? Let’s take an in-depth look at what makes dome cameras different from bullet cameras to help you make an informed decision.

As the name suggests, a dome camera is a type of security camera that features a dome-like shape. The camera itself is encased in a transparent glass that allows it to record footage at a 360-degree view. Dome cameras are mostly used indoors and are commonly used by businesses such as hotels, restaurants, retail stores, and the like.

One of the major benefits of using a dome camera is that it makes it difficult for burglars to determine where the camera is pointing. Not only that, but the outer glass of the camera is durable enough to resist vandalism. Because the camera is protected inside the dome, it can be difficult to disable these devices or knock them out of position.

Another benefit is that a dome camera records footage at a wide-angle, thus allowing you to capture more details of the scene. 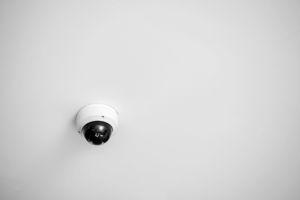 Much like dome cameras, bullet cameras are named after their long, cylindrical shape that resembles a lipstick tube or a bullet shell. These cameras have been around for decades and act as a visible deterrent for homes and establishments. Studies have shown that bullet cameras make your home a less-than-ideal target for burglars and criminals.

What makes bullet cameras so popular is their range and installation. Bullet cameras have a superior range compared to dome cameras, meaning you can record larger areas like parking lots and backyards with ease. Also, bullet cameras are a breeze to install. Thanks to its cylindrical shape, larger lenses can be fitted into the bullet camera’s body which allows for greater light sensitivity and video detail. Most bullet cameras have a small lip at the top of the camera lens to protect them against glare and weather.

There are a couple of things worth noting that make dome cameras different from bullet cameras. Here’s what you need to know:

When it comes to installing a dome camera, the base of the device is mounted onto a wall or ceiling using a set of screws. While the process is pretty straightforward, it does make it difficult for you to adjust the camera’s positioning whereas, with a bullet camera, you can simply reposition the device (provided that the area you want to record is within its range).

Bullet cameras are typically mounted onto the side of the wall. The mounting handle allows you to adjust the camera’s angle without having to remount it to another location. In terms of installation, bullet cameras are much easier to work with compared to dome cameras.

A security camera’s range is determined by a couple of factors such as the sensor, the type of lens used, resolution, and more. In general, dome cameras have smaller lenses compared to bullet cameras which limit their range somewhat. Because bullet cameras use larger lenses, they have a better range compared to dome cameras, thus making them the ideal choice for recording large areas.

The good news is that both dome and bullet cameras use infrared LEDs to ensure good visibility at all times. When buying a security camera, the device must have LEDs so that it can perform reasonably well even in low-light conditions.

Choosing between dome and bullet cameras

While the differences between dome and bullet cameras are relatively minor, it’s important that you consider them carefully. For example, if you’re looking for a discreet security camera that can record videos at a wide-angle, then a dome camera is the one for you. If on the other hand, you prefer a visible security camera that can act as a burglar deterrent, then a bullet camera should be your main choice.

Perhaps the best advice would be to use both dome cameras and bullet cameras as part of your security system. This way, you get to enjoy the best of both worlds and have a set of security cameras that have little to no compromises.

If you’re interested in having a security camera installed on your property, feel free to contact Casa Security to get the best security system services available in Perth.